Rathman replaces Mara Casey Tieken who has been a superb host and an invaluable contributor to Rural Matters, helping the program become the leading podcast in the country focused on expanding the dialogue among stakeholders in the areas of education, health and business in rural communities. Since launching in September 2017, the podcast has reached nearly 5,000 downloads, and has attracted national sponsors such as the American Association of School Administrators (The School Superintendents Association) and the National Rural Education Association, along with marketing partners that include the National Rural Education Association; Center for Rural Affairs; Ohio Small and Rural Collaborative; Foundation for Rural Service; NTCA—The Rural Broadband Association; Harvard Graduate School of Education Rural Educators Alliance; Community Hospital Corporation; and Journal of Research in Rural Education. Rural Matters is available on iTunes. Google Play, and Stitcher. 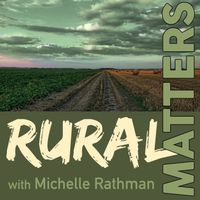 In Part IV of our four-part series on rural economic and community development, produced in collaboration with and supported by the Thomas USAF Group, Michelle chats with Matt Dunne, Founder and Executive Director of the Center on Rural Innovation and Anna Johnson, who has led the agricultural policy portfolio at the Center for Rural Affairs for almost four years. Dunne discusses how the Center on Rural Innovation’s Action Tank enables rural communities and entrepreneurs to create digital economy ecosystems that build jobs for the future, including those involving coding and software. Johnson describes how the Center for Rural Affairs does small business lending and community inclusion work in Nebraska, as well as farm bill advocacy and agricultural policy development. Dunne discusses how the Center on Rural Innovation’s mapping program addresses the rural economic gap that developed after the economic crisis of 2008 by enabling policymakers to determine broadband needs, identify health care gaps, and locate valuable resources, such as nearby colleges and universiti4es. Recently, Dunne notes, the Center helped provide a Health Preparedness Index that enables decision-makers to determine where a community could be overwhelmed by the COVID-19 pandemic. Johnson also talks about the work her organization does with farmers and the how small farmers have been impacted by the lack of broadband access. This episode is sponsored by Thomas USAF Group, www.thomasusaf.com.

In Part III of this four-part series on rural economic and
community development, produced in collaboration with and supported by the Thomas USAF Group, Michelle welcomes back Thomas Kimsey, president and CEO of the Thomas USAF Group, and also chats with Bette Brand, Deputy Under Secretary for Rural Development at the Department of Agriculture since February 20, and with Mark Lee, Chief Executive Officer and President of Rhino Health Inc., the first United States manufacturer of nitrile rubber gloves about governmental and private sector collaboration in the rural economic and  development space. Through its partnership with the Department of Agriculture’s Rural Development Office, Thomas USAF is able to provide capital to both small and large businesses and entrepreneurs, Kimsey notes.

In the final segment of our four-part series on rural poverty and the 2020 elections, developed in collaboration with and underwritten by the Robert Wood Johnson Foundation, Michelle chats with Dee Davis, founder and president of the Center for Rural Strategies; Jonathan Rodden, professor of political science at Stanford University, and author of Why Cities Lose: The Deep Roots of the Urban-Rural Political Divide; and Pakou Hang, a trainer at Vote Run Lead, about the upcoming elections.  People vote on the basis of whether they think a candidate truly represent people like themselves, notes Davis. They vote more on the basis of candidates they like and whose values they support, rather than on policy issues, he adds. Hang discusses the important role of women in agriculture today, who tend to be the largest landowners, and are more interested in rural health, nutrition, and the ecosystem. Women in agriculture and in rural communities are coming together in social networks and exerting a greater influence than in the past, she explains. According to Rodden, the racial injustice movement has affected rural areas, which have become more heterogeneous, as well as urban areas. The episode concludes with insights about the importance of immigrants who are moving to rural communities for jobs (the majority of dairy farm workers are now Latino, notes Hang); whether democracy itself is in jeopardy; and the role of voting by mail in the 2020 elections. This episode is sponsored by the Robert Wood Johnson Foundation, www.rwjf.org

2020 Election Issues (Part I) with Nathan Ohle and Kate Cassling

In Part III of our four-part series developed in collaboration with and underwritten by the Robert Wood Johnson Foundation, which deals with rural poverty and key issues in the 2020 elections, Michelle chats with Nathan Ohle, CEO of the Rural Community Assistance Partnership (RCAP), a national network of non-profits focused on water access, economic development, and capacity building for rural communities and Kate Cassling, a Director with the Bipartisan Policy Center Action, where she works on health care policy advocacy. Ohle discusses how the role of rural and small communities has evolved in the last decade through increased engagement in local, state, and federal elections because these voters often feel ignored when it comes public policy. Broadband accessibility, telehealth, and access to water are major policy issues for rural and small communities, according to Ohle.  Cassling says that there is broad agreement on topline issues among both Democrats and Republican rural voters in terms of increased funding and improving access to health care. In addition, she says, according to a recent poll her organization conducted, three of five voters say they would be more likely to vote for the candidate who would address rural health care issues. COVID-19 now is affecting more rural communities in terms of per capita deaths, and rural voters will want hospital infrastructure improvement, access, and services, she adds. This episode also includes incisive discussion on the policies that President Trump and former Vice President Biden are touting in terms of rural health care and perceptions of the urban-rural divide in the political environment. This episode is sponsored by the Robert Wood Johnson Foundation, rwjf.org.

This riveting episode is the second in our four-part series on rural poverty and issues impacting the 2020 elections presented this month in collaboration with the Robert Wood Johnson Foundation, Michelle chats with several graduate students at the University of Michigan who worked with the university’s Poverty Solutions program and saw first-hand, on the ground, what poverty looks like in rural America: Lanora Johnson, whose research focuses on gender inequality and rural poverty in Central Appalachia; Jasmine Simington, whose research explores how housing policies shape racialized spatial inequality; and Meg Duffy, a researcher  at Poverty Solutions who primarily works on a mixed methods study called Understanding Communities of Deep Disadvantage. Jasmine describes how the project holistically ranked the most disadvantaged counties and cities in the United States and notes those locations were spatially clustered in Appalachia, the rural Southeast, deep South, border towns in Texas, and tribal lands, Poverty Solutions researchers went on site visits to several of these counties and were embedded in these communities for a couple of months. Meg, was embedded in both Marion County, S.C. whose residents are mostly black and Clay County, Ky., whose population is mostly white. There were similar challenges in both counties, including access to transportation and jobs, but also certain similarities, such as volunteerism and resiliency. Lanora discusses a “true hero,” Mayor Hopkins, whose small town was devastated by flooding, and how community members had to deal with the cleanup and how residents still are struggling to live in a community whose homes often still smell from mold. The bottom line, she explains, is that, in terms of FEMA support, there was a notable disparity between assistance provided to white communities compared to those given to black communities. This episode truly paints a vivid portrait of several under-resourced communities in the United States and the challenges residents in those communities face every day. This episode is sponsored by Community Hospital Corporation, www.communityhspitalcorp.com and the Robert Wood Johnson Foundation, www.rwjf.org.